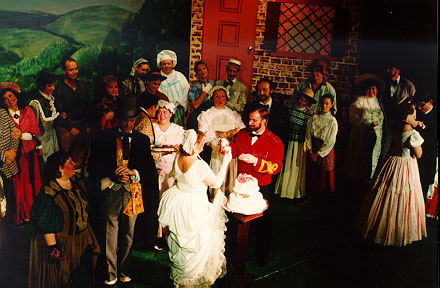 Although their Trial By Jury (1875) was a great success, two years went by before Gilbert & Sullivan teamed up again. This time, Richard D'Oyly Carte and his Comedy Opera Co. Ltd. Paid the men 200 guineas in advance to write a new, original, two-act comic opera.

As he had with Trial By Jury, Gilbert based The Sorcerer on his own, previously published, work — "The Elixir of Love," a short story printed in the Christmas 1876 Graphic magazine. In it, the Bishop of the village of Poverleigh promotes peace and harmony by doling out a love potion to his parishioners. In Gilbert's libretto, the doling-out is done by a Sorcerer, Mr. John Wellington Wells, hired by Alexis, an aristocratic young man so in love with his fiancée he wishes everyone in his village to be in love too. But each of the dosed villagers falls in love with exactly the wrong person—very young girls with very old men, aristocrats with peasants. But the villagers are properly rematched, and England's greatness restored, just before the final curtain. The Sorcerer may be a one-joke show, but its musical and verbal dexterity ensure that the joke is still entertaining.

Sullivan, as became his habit, wrote the score at the last minute; he hadn't even time to compile an overture, so the first run of The Sorcerer used a selection from his Henry VIII incidental music as introduction. The music, even if written in haste, is charming, and offers the first examples of what Sullivan's biographer Arthur Jacobs calls his "basic operatic 'armory'"—"Old English" dances like the gavotte for Lady Sangazure and Sir Marmaduke, contrasted with the villager's rough and lively Country Dance in Act II; sentimental drawing-room ballads, exemplified by Alexis's first solo and his duet with Aline in the Act I Finale; patter songs, of which one of the earliest and best is given to John Wellington Wells; and musical parody, in Wells' Incantation and other choice mock-operatics along the way.

If Trial By Jury suggested that the English were indeed capable of producing sophisticated light opera, The Sorcerer confirmed the fact. However, in the two years between them, Sullivan's star as serious composer and conductor continued to rise, and not everyone was pleased with the great hope of English music; one critic expressed "a sense of disappointment at the downward art course Mr. Sullivan appears to be now drifting into... a giant may play at times, but Mr. Sullivan is always playing."

In addition to its own charms, The Sorcerer has a significant role in Savoyard lore. Though they didn't know it on November 17, 1877, the audience at Opera Comique theatre were witnessing not only the first "real" Gilbert and Sullivan operetta, but also the debuts of many G&S standbys. George Grossmith (as John Wellington Wells, a part originally intended for Sullivan's late brother Fred); Rutland Barrington (Dr. Daly); Harriet Everard (Mrs. Partlet); and Richard Temple (Sir Marmaduke), all went on to the next Gilbert & Sullivan production, HMS Pinafore, and several stayed with the team thereafter. Grossmith originated Bunthorne, Ko-Ko, and all the other great comedy baritone roles; Barrington, the original Pirate King and Pooh-Bah, became the quintessential G&S second banana; and Temple was the original Mikado.

The Sorcerer is also the only G&S operetta to be substantially revised long after its premiere, when it was revived by D'Oyly Carte in 1884 as a stopgap between Princess Ida and The Mikado. The collaborators shortened the Act I Finale and wrote a completely new beginning to Act II, and Sullivan got to add a full-scale overture in the best Savoy tradition (of course, by 1884 there was a Savoy tradition). This version is The Sorcerer you'll see today.

A 21st-anniversary production of The Sorcerer, on November 17, 1898, provided the last public appearance of Gilbert and Sullivan, who went their separate ways after the failure of The Grand Duke. They appeared for a curtain call, neither man acknowledging the other. Their great collaboration may have ended acrimoniously, but The Sorcerer reminds us of a time when it had a rosy future.