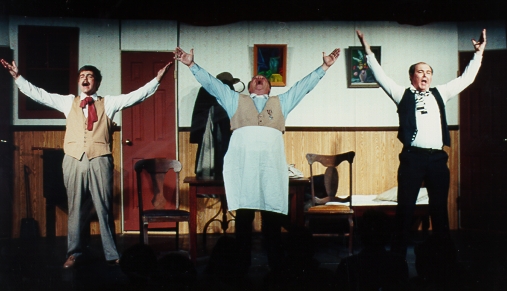 In 1866, the 24-year-old Arthur Sullivan was already one of England's most respected composers. He had already written successful incidental music for Shakespeare's "Tempest" and an "Irish" Symphony, and was working on a Cello Concerto. This popular composer also moved easily in society, and belonged to a group of talented gentlemen who met regularly at Moray Lodge, home of the successful merchant Arthur Lewis, to perform songs and skits as "The Moray Minstrels."

Another member of the Minstrels, Francis Burnand (later to become the editor of Punch magazine), proposed to Sullivan a musical adaptation of the popular one-act farce Box and Cox (1847) by J. Maddison Morton. Sullivan worked up a score in two week's time, and Cox and Box, as Burnand called it, was given its first performance by the Moray Minstrels, with piano accompaniment, in May 1866. Burnand and Sullivan's "Triumviretta in One Act" (a humorous reference to its three-character cast) was revived the following year for a benefit performance at London's Adelphi Theatre with orchestration by the composer, who added a little overture for another performance in July.

Cox and Box was eventually taken up by the producer German Reed for his Royal Gallery of Illustration — not an art gallery, but a music hall, whose name was chosen to placate middle-class Victorians who thought theatre-going an improper activity. It opened March 29, 1889, running for 300 performances.

Cox and Box is not "G & S," but it was a regular part of the D'Oyly Carte repertory from 1921 until 1982. Rightly so: it exhibits in a nutshell many examples of what would become essential, and endearing, qualities of the Gilbert and Sullivan operas. Burnand's lyrics lack Gilbert's gentlemanly silliness; Sullivan's music is charming and assured, generously foreshadowing the flair for musical parody in the Savoy Operas. In less than a half-hour, Cox and Box glances at Handel, the emotion-drenched recitatives and military choruses of Italian opera, and, most memorably, saccharine Victorian ballads — Box's beautiful lullaby is addressed to a slice of frying bacon. (Sullivan had the last laugh: "Hush'd is the bacon on the grid" became a successful parlor song — with different words, of course.)

Although contemporary critics admired the melodiousness and workmanship of Cox and Box, one of the stuffier ones protested that Sullivan's juxtaposition of "exquisite melodies" and "ludicrous sentiments," however clever and entertaining, was unseemly behavior for an Important British Composer. Sullivan and British music, the reviewer declared, were better off with symphonies and oratorios. During the long run of Cox and Box, Sullivan did complete an oratorio. The subject, perhaps significantly, was "The Prodigal Son." If the composer was in a repentant mood, it didn't last; he met W.S. Gilbert in 1871.