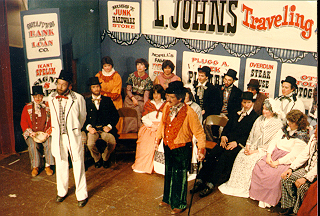 Excitement is the keyword in this production. Minstrel shows were the reigning form of entertainment for over one hundred years. Its popularity was based on its common denominator form of joke lines and the energy of the minstrels themselves. In the 1950's, I remember seeing a Minstrel show in my church basement. As far as I know, it might have been the last Minstrel Show in the world. I was only six at the time.

Studying this art form and researching the historical background has been self satisfying and also frustrating. There are so few books on the subject that future study would have to take me to larger libraries in New York.

Then, working with one of the finest composers in history was in itself most rewarding. Stephen Foster's music is so ingrained in our very fiber that every rehearsal was uplifting and fun. Stephen's life, unlike his music, is nebulous and obscure. As an author, I had to begin to manipulate the facts. I tried to stick to the first hand accounts of Stephen's life but I also realize I have to create more out of the Foster sequences if the piece is to make any progress.

Many people have taken part in the three productions of this play. Each time I learned more about the power and flaws in the writing. I thank each actor for his patience and talent. I am grateful for all their ideas.

This present group has proven to be one of the most talented groups I have ever worked with. I Thank each of them and hope you love them as much as I do.

This play has been lovingly dedicated to Mildred Sheehan