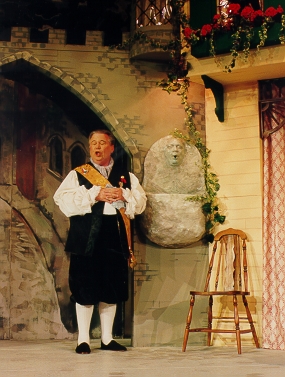 Gilbert and Sullivan's remarkable collaboration began and ended with failure: Thespis, in 1871, and The Grand Duke, in 1895. Sullivan's contribution to Thespis is lost, so it is difficult to judge the cause of its failure. But there's universal agreement concerning The Grand Duke: the fault is definitely Gilbert's.

Critics mention the libretto's unseemly preoccupation with plumbing, both structural and personal, which, combined with a plot involving sausage rolls and a man accumulating four wives, left Gilbert open to charges of poor taste. There were complaints about too many lyrics too hastily written, of "kitchen sink" quality to some songs (Ludwig's Act II paean to the Greeks is partly in Greek); of too many forced rhymes (though the Notary neatly excuses his: "When exigence of rhyme compels, orthography foregoes her spells, and 'ghost' is written 'ghoest'").

But the bulk of the criticism concerns Gilbert's unchecked penchant for plot contrivances. An audience will gladly accept an absurdity here, a whimsicality there, if it adds to the fun (Frederic's devotion to duty in Pirates, the crime-a-day curse in Ruddigore, babes switched at birth in you-name-it). But The Grand Duke is contorted by an overwhelming whimsy, like a cartoon. When the "technically dead" Ernest says: "There are no newspapers where I come from," we may chuckle, but we can't help wondering: "Just where does he come from?"

Director Byron Wilmot has completely revised and edited The Grand Duke for our production. The dialogue (which even Sullivan called "redundant") has been pruned; equally redundant musical passages have been excised or reduced; Rudolph's song "Well, he's a pretty kind of fellow" has been moved from just before the finale to a more dramatically logical place earlier in Act II. Gone, too, is a uniformly deplored "bit of business" that required the chorus to hide at the approach of the Prince of Monte Carlo, then to "rush on in a wild 'Halloo'" after which everyone "joins in a wild dance."

Faults aside, there are any number of unfamiliar delights in The Grand Duke: Ernest's song describing the skills required to "rule a theatrical troupe," as Gilbert did for so many years; Julia's scenery-chewing notion of a first-rate part (Gilbert created the role of Julia for Ilka von Palmay, a Hungarian singer with an accent to match, which he turned to humorous advantage); and a string of sparkling ensemble numbers.

The Grand Duke may not be up to the G&S standard, but for any true Savoyard it's too good to miss.