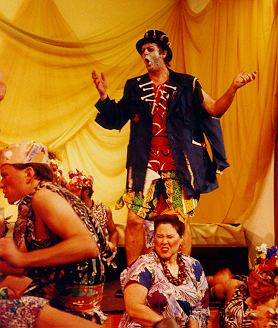 As Utopia Ltd is unfamiliar to almost everyone, we wish to alert audiences to two scenes in Act II that may have you wondering, "Is this in the original script?" The first of these is the cabinet meeting King Paramount holds with the Flowers of Progress, and the answer is Yes, this is performed exactly as Gilbert and Sullivan wrote it, down to the instrumentation. The second is the presentation scene immediately following, and the answer is No, this is not in the script, at least not in this form.

As written and performed in 1893, the presentation scene consisted of nothing more than a lengthy (albeit stunningly costumed) reenactment of a genuine "drawing room" at Buckingham Palace. Utopia was by far the most expensive of the Savoy productions, and much of the money went to deck the women in splendid gowns for this scene. There was no dialogue, and the point of it all escapes modern audiences, but Victorians took no end of delight in such stuff. (In fact, we latter day Yanks have shown similar predilections: one thinks of a comparable costume parade in Camelot.) But for an Off Monroe production such ornamental whizbangs are out of the question, and so, rather than cut the presentation scene entirely, we have chosen to recast it in a slightly shorter and less reserved form.

Because Utopia is so rarely presented, there are few traditional performance practices to follow. It is very long and lends itself to pruning, but please be assured that the cuts we've made are not responsible for some quirks of plot you may notice; these are in the original.

And finally, all Rochesterians are proud to note that George Eastman's product and slogan had gained sufficient international currency by 1893 to rate a reference in Gilbert and Sullivan's new operetta.