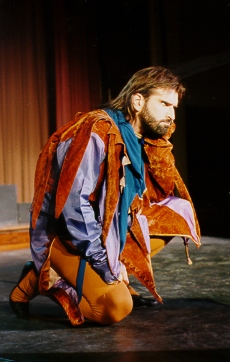 Arthur Sullivan, a gifted composer, always wanted to create "the Great English Romantic Opera." Many — including myself — believe he did just that with Yeomen. Unique among the Savoy operas, the characters in Yeomen are grounded in reality. The philosophical Fairfax, brash Phoebe, jealous Wilfred, willing Elsie and, above all, cynical Jack Point, the Shakespearean Clown, are perhaps the most interesting characters in the whole Gilbert and Sullivan repertoire.

New to this production: Gilbert was concerned that Yeomen was all too serious for what was suppose to be a comic opera. Two songs were deleted from the first act when the production opened in 1888. Due to the diligent research of Off-Monroe's Internet guru — Bob Weeks — we have recovered the lyrics and music to both songs and have re-introduced them in this production. Wilfred the Jailer concludes the opening scene with Jealous Torments, a deliciously gruesome song exhibiting his bitter love for the winsome young Phoebe. And Sergeant Meryll proclaims in martial tones his fatherly pride in his hero son, Leonard (A Laughing Boy Just Yesterday). The song does not necessarily advance the plot, but it is a wonderful combination of paternal sentiment and military braggadocio.

View The Yeomen of the Guard Photos on Flickr