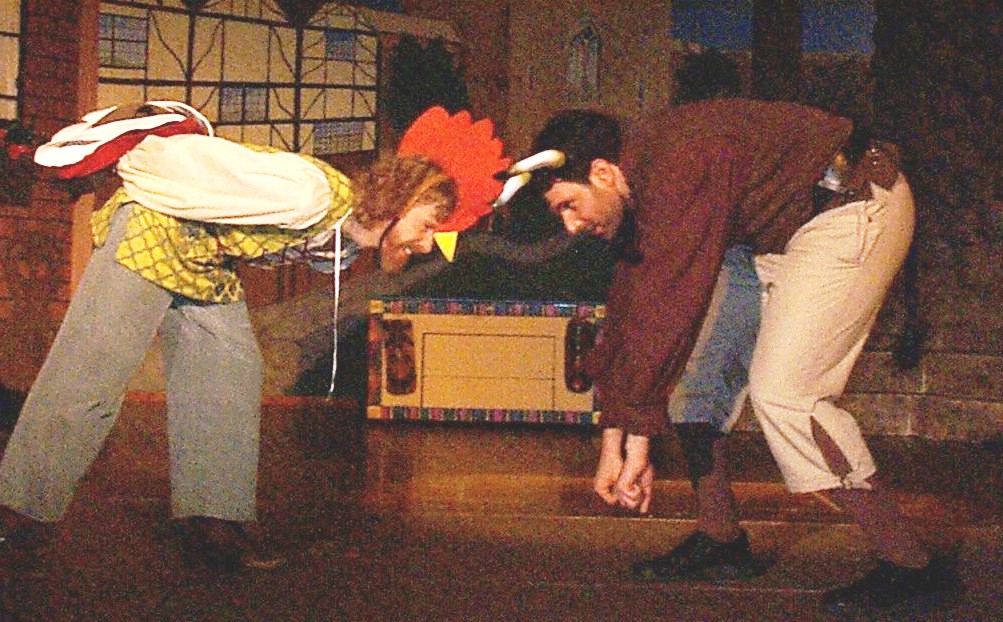 The story of The Yeomen of the Guard doesn't end the way the "I Have a Song to Sing, O!" duet between Elsie and Jack Point has led us to expect — in fact, it takes an opposite turn, and Point becomes a broken man at the betrayal of Elsie. It is difficult to rise above the obvious plot flaws when dealing with serious themes such as death and loyalty. I became intrigued with the idea of having the audience want Jack Point to realize his error in wanting Elsie, and although sad at the end, there is hope for him finding another, truer love.

This is the darkest of the G&S repertoire, but it is also has the most wonderfully intricate and lyrical music. That is why we decided to add a few more instruments along with the piano. The dancers bridge the orchestra and audience with the actors themselves, thereby enabling the more realistic plot style and poetic, almost Shakespearean, turn of phrase to take on a Commedia dell'arte feel. The dancers help in creating an atmosphere for the audience to accept the more stylized speech and actions. They also create a flow between orchestra and stage, making them a bridge between the real and the imagined. We aim to foster natural dramatic style by Seventeenth-Century standards, not by today's. I hope to convey the 'everyday'-ness of life on the Tower Green — torture and beheadings were a common enough event, as ordinary as going to the movies is today.

We have set our play in the sixteenth century (the end of Henry VIII), when the Church was still a central influence in folks' lives and science was considered to be part of the mystical branch of learning ("Colonel Fairfax is not a sorcerer. He's a man of science and an alchemist."). People of the time were superstitious by today's standards. For example, ravens were considered good luck to the Tower. While there were ravens, the Tower and England would stand firm. Having a raven die in the fire was considered a bad omen, even suggestive of witchcraft.

This was also the middle of the popularity of the Commedia dell'arte style of performances, which spanned four centuries. In keeping with the Commedia dell'arte theme, we have added the two Princes in the Tower. History reveals that the real princes were several centuries earlier and their remains were eventually found under a stairwell around the time our play takes place. The thought of other young captives interested me to the point of incorporating similar youths into the plot, and having them run away with Point's troupe.

The traditional Commedia dell'arte was concerned mostly with disgraceful love intrigues (Fairfax and Elsie), clever tricks to get money (Jack Point) or outwit some simpleton (poor Wilfred). There were the long-lost children stolen by the Turks (our show's addition of the Princes in the Tower), the same plotting maids (Phoebe), bragging captains (Fairfax), aged fathers (Sgt. Meryll) and wily widows (Dame Carruthers).

The Yeomen of the Guard is the nearest that Gilbert and Sullivan ever came to grand opera. Both had a high opinion of it. Opening night was October 3, 1888 in London. There were other openings that year and the next around the world. We are using the music from the D'Oyly Carte revival of 1897, which was pared down slightly. We have also made some dialogue cuts in order to gloss over the most conspicuous inconsistencies in Gilbert's plot.

View The Yeomen of the Guard Photos on Flickr