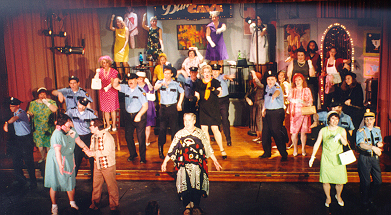 Patience... the Beat Goes On

"In mocking the fadism of an artistic movement rather than the art itself, Gilbert achieved a satiric concept universal in its implications." It is this statement made by Peter Kline (former member of OMP) in his book Gilbert and Sullivan Production, that guides this fourth OMP production of Patience.

I have been involved in various capacities with OMP since 1981. As OMP approaches its 20th Anniversary, and this fourth production of Patience, I begin to look at each of the shows quite a bit differently than I did back in 1981. With each exposure to anything theatrical, be it by Shakespeare, Neil Simon, or Gilbert and Sullivan, you discover a few things that you hadn't noticed before. In Patience, adoration, affection, and fads all come into play. These parts are evident from the start, but I wanted to examine them a little differently. I began to look at idols, and their adoring fans. My first though was Frank Sinatra and the bobbysoxers, but since poetry, not music was at the artistic heart of Patience, my thoughts turned to Beat poetry of Alan Ginsberg, and to his seminal work "HOWL", one of the works that defined the "Beat" generation. (I also wonder if Bunthorne's "Oh, Hollow, Hollow, Hollow" inspired Ginsberg?) Having found my "artistic movement" I was ready to begin work on this production. Changing the setting of Patience is not a new and original idea. The D'Oyly Carte Company in the 1970's placed a revival in the mid-60's more "Flower Power" than "Beat." In the "Beat" setting, all that make Patience in it's Aesthetic togs: poets, adoring fans who don't understand but blindly follow, jealously, and of course love both the craving for, and unselfishness of love, are all present and accounted for. With all of the essential elements intact it was time for all of us to have fun remembering (those of vintage years) or discovering (those who weren't even born yet!) that fabulous era in 20th Century known as the "Beat".

I invite you to discover Patience with us, to enjoy and delight in one of my personal favorites of the Gilbert and Sullivan canon, a work that is "universal in its implications."