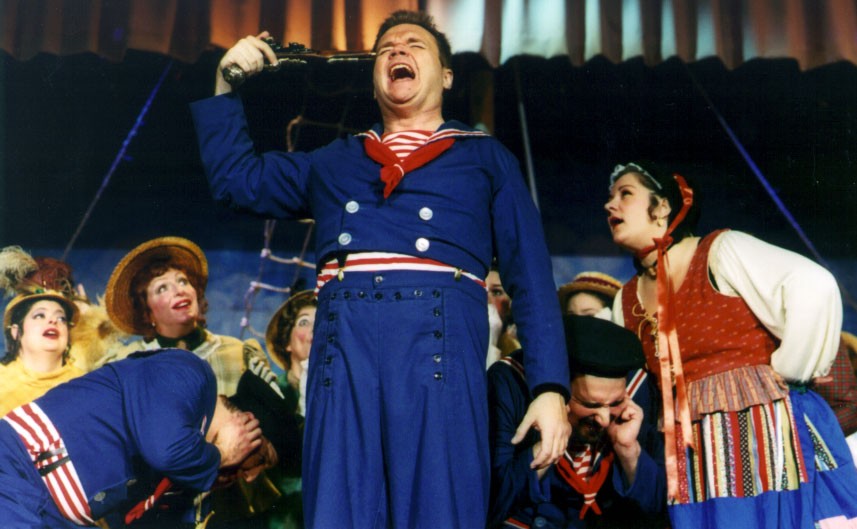 OK, so OMP has done Pinafore four times before. So, how do I make the show a litle different — a little more my style?

I read on a Gilbert & Sullivan website that as the Captain's daughter, Josephine would have grown up surrounded by servants; that would have been her way of life. The whole class dilemma became much clearer to me. Suddenly, there was a story in my mind to go along with the wonderful music. Pinafore came alive for me at that point.

I spent the entire summer chuckling at the possibilities. Hebe, Buttercup and Dick Deadeye suddenly became some of my favorite G&S characters. I just adore Dick Deadeye — the one character who speaks the truth is despised for it and hideously disfigured as well. What a fabulous creation of Gilbert's in his world of exaggerated irony!

And the music! Probably the finest, tightest score of the entire collaboration. The dances for the Act 1 Finale and the wonderful structure of all the second act are just superb. From the soaring line in 'A Simple Sailor...' to the tango in 'Things are seldom what they seem', and, of course, the rousing anthems of British patriotism. There is so much that could be done with the "airs from that infernal nonsense Pinafore".

The wonderful work of the OMP cast and crew has renewed my appreciation for the gift of these two talented playwrights. I hope we manage to install (or reinstall) in you the joy and delight of Gilbert & Sullivan's HMS Pinafore. It is certainly one of our favorites; we hope it is one of yours.

I also want to express my heartfelt thank you to all of OMP and a sincere wish for another 25 years!

At the time HMS Pinafore was being written, the role of 'Cousin Hebe' was to be much larger. However, due to some late casting changes, the new actress to play 'Hebe', Jessie Bond, did not feel her acting skills were equal to the part, or so the story goes. As a result, most of poor Hebe's dialogue in Pinafore was removed or given to someone else.

Gilbert, never one to give up on an idea he thought was good, wound up using some of it in other places. Some of the dialogue 'Hebe' was to have said very closely matches the lines given to 'Lady Jane' in Patience.

We have incorporated what is believed to be the "Lost Hebe Dialogue" into this version of Pinafore, for the purposes of broadening the character.