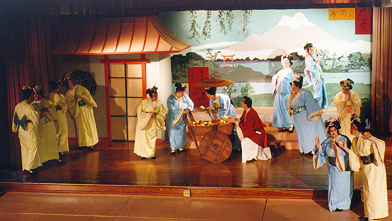 The Mikado was born, it is said, when a Japanese ceremonial sword fell off the wall of Gilbert's study while he was pacing around trying to come up with an idea for the next operetta. The sword made him think of a Japanese exhibition that he had recently opened in London and was all the rage, and by the next morning, he had formed a concept and outlined a plot for what was to become one of the most popular operettas of all time.

Our production was inspired by an exhibition as well. Last summer we viewed the Japanese prints at the Memorial Art Gallery. We liked their colorfulness, their flatness, the way the printer's stamps are built right into the picture, and we wanted to incorporate these elements into our set to create a picture-book fairy-tale Japan, the backdrop to a cartoon. Getting practical, we found a book of postcards of Japanese prints, tore out one we liked, and reproduced it on our stage.

Of course, The Mikado is not really about Japan at all, but about Victorian England. Gilbert places his satire in an exotic locale to make it easier to exaggerate. He made no attempt to recreate authentic Japanese culture, and neither do we.

Here then, is our show: a Japanese print come to life, a postcard from a Japan that never was.